On Wednesday, June 19, 2013 at 7 am (PDT), I will testify before the Senate HELP Committee, Subcommittee on Primary Health and Aging – chaired by Senator Bernie Sanders (I-VT) who had formerly introduced the reauthorization bill in January 2012.

***Watch the proceedings LIVE at www.help.senate.gov.***

The hearing is titled “Reducing Senior Poverty and Hunger: The Role of the Older Americans Act” and it is held in support of the OAA reauthorization and 2013 amendments to the bill.

About the Senate HELP Committee: The Committee began in 1869 and has been called the Health, Education, Labor and Pensions (HELP) Committee since 1999.

About the Subcommittee on Primary Health and Aging: The Subcommittee has oversight over many issues including but not limited to: The Older Americans Act, elder abuse and long-term care services. 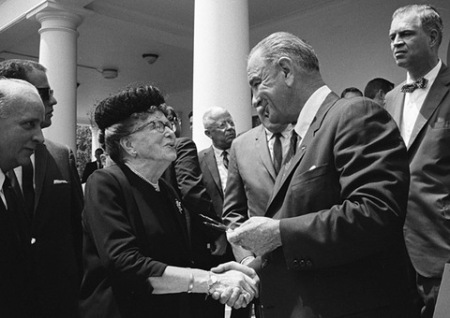 “President Lyndon Johnson hands a pen from the signing of the Older Americans Act to an unknown woman on July 14, 1965. Photo by Yoichi Okamoto and courtesy of the LBJ Library.” (Reference: PBS News Hour Article, May 29, 2013)

This entry was posted on Tuesday, June 18th, 2013 at 10:35 AM and is filed under Advocacy, Older Americans Act. You can follow any responses to this entry through the RSS 2.0 feed. You can leave a response, or trackback from your own site.