Last summer, Seniors First San Diego advocates made their voices heard by championing the importance of AB 138 which requires the use of the Elder Index, rather than the antiquated Federal Poverty Level, in planning by local Area Agencies on Aging.

Advocates flooded the office of Senator Christine Kehoe with more than 250 letters of support. Kudos to Senator Kehoe for reading the letters and supporting the bill.

Last Sunday Governor Brown signed into law Assembly bill 138 the Elder Economic Planning Act of 2011.  It is a critical first step in making policy decisions for seniors based on real data rather than methodology that grossly understates income adequacy to meet basic needs.

This is a major victory for seniors throughout the State of California and the first big legislative success for Senior Community Center’s Seniors First San Diego™ campaign.

During this campaign, we learned a few things along the way. Foremost, we learned of the commitment that is required to see an idea transformed into policy. Issues are not resolved, nor policy created in a single act. It is a long road filled with many obstacles. So, Seniors First San Diego has adopted an acronym, V.E.R.A. which is rooted from Latin for truth, to remind us what is needed in our efforts to ensure that we stay true to our commitment to San Diego seniors. END_OF_DOCUMENT_TOKEN_TO_BE_REPLACED

Windermere: Our Family of the Day 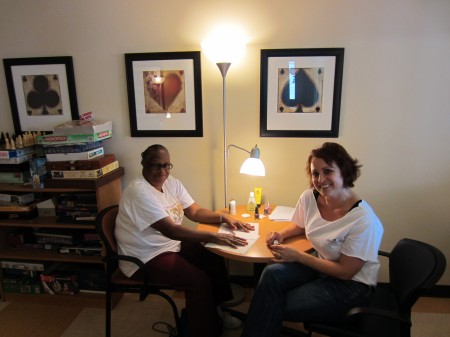 Our Food from the Heart campaign kicks off with the first family of the day sponsors Windermere.

In addition to sponsoring our nutrition program, Windermere staff spent the day volunteering and providing activities for seniors, such as a tenant rights seminar to a manicure station.

Picture: Sarah Scott gives a manicure to Augustine at the Gary and Mary West Senior Wellness Center.  Click here to become a Food from the Heart family >>

An Inspiration for Us All. . .

100-year-old Faujah Sing set a world record on Sunday for being the oldest person to complete a marathon.  He completed the 26.2 mile Toronto Waterfront Marathon in just over eight hours. This is not his first marathon. In 2003 Sing set the record for those in their nineties while running in the same event. He attributes his successes to exercise, a healthy diet consisting of tea and curries, and steering clear of alcohol and nicotine. Singh’s victory proves that age doesn’t matter, saying that, “The first thing is to get rid of this notion that you’re old.”